Partner and Chairwoman
of AdQualis

She is a graduate in psychology from the University of Barcelona. She participated in the Senior Management Programme at the IESE University of Navarra in 2006 and again in the course Women on the Board of Directors at the same institution in 2012.

Castilla Consuelo spent the early years of her career training in the field of search and selection in the HR departments of different companies. Following these years of experience, her entrepreneurial spirit led her to create her own company, MC Asociados Executive Search, to offer a quality selection that was geared towards meeting both customer needs and caring for and guiding candidates in their professional careers.

Starting in 1995, new companies joined MC Executive Search to form Grupo MC Asociados, now AdQualis. The company offers a high quality comprehensive HR service that is recognised by the major multinationals and SMEs in Spain who look for excellent service to select managers and middle managers for their companies.

In 2007 the HR Digital publication awarded her the "HR Influential figure in Spain" and in 2013, 2014 and 2015 she was listed among the top 100 women leaders in Spain. Ms. Castilla was also chosen to participate in Cesar Liesa’s Barcelona and Madrid publication "Characters" in 2009 and 2010.

She is also advisor to the Social Board of the Pompeu Fabra University in Barcelona and a Patron of the Fundación Éxit. Moreover, she actively collaborates with the Vicente Ferrer Foundation.

The Montse Castilla’s career has always been linked to the field of Human Resources. In 1987 she founded MC Asociados with Consuelo Castilla and Elvira Masso to provide specialised and quality executive search services.

In 1998 she rejoined the company to found and manage the new subsidiary of Grupo MC Asociados in Girona. Since 2001 she has been the Managing Director of Centil 90 Recruitment, now AdQualis Talent Search.

Partner and BDM of INTEGRHO

Partner and CTO of Integrho

Partner and CFO
of AdQualis

Jordi Larré began his career as a programmer analyst in payroll software in several companies in the sector and in 1994, under the growing demand for integrated HR solutions, joined the Grupo MC to found Enter Systems, now AdQualis HR Apps.

Esteve Sabate is a Telecommunications Engineer from the University of La Salle Bonanova in Barcelona and, after holding several management positions in multi-national companies such as Unisys and Olivetti both in Spain (Barcelona) and Italy (Milan), he joined the Grupo MC to found Enter Systems in 1994.

Since then he has been Partner of the Group and Technology Manager of Enter Systems, a company that has is now called AdQualis HR Apps .

Isabel Rubio studied Finance and Accounting at the EAE Business School. In 2005, she joined the Department of Administration and Finance of the Grupo MC and in 2009 became the Financial Manager of the Group.

She became Partner of the company In September 2012 while continuing to work as CFO of AdQualis. 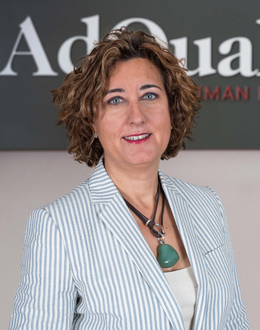 She holds a degree in Psychology from the University of Barcelona, specialising in Organisation and Management. She has taught several programmes of Business Management and HR Development (University of Barelona, Bosch and Gimpera Foundation and Employer Associations of the Sector, among others). In 2016, she participated in the Senior Management Program of IESE University of Navarra.

She began her career in a IT services company to later join the CAE Group - Industrial Sector, currently the Grupo Dragados, with more than 5,000 employees.

Later she was head of the Department of Training and HR Development of a section of the Olympic Organising Committee Barcelona '92.

For over 10 years she held the post of HR Development Manager for Mutua Terrassa Grup (a Health Insurance Group with more than 3,000 employees) and also held this position in Cedipsa, a subsidiary of the Cepsa Group.

After taking on the HR Management of a Health Centre, she joined MC Asociados in 2006 as Business Unit Manager and became Manager of Executive Search Madrid in 2009.

She became Partner in 2014 and General Manager of AdQualis Executive Search in Madrid.